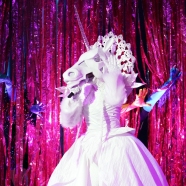 Posted by bigcityfolks on March 24, 2019 in The Localist, Uncategorized | Leave a comment

I was at a show last week at a popular local songwriter spot, and the performer was using live auto-tune on the vocals.  I’ve seen musicians at spots like this use live auto-tune over the years.  Sometimes when you move close to the singer, you can hear a second (de-tuned) pitch coming from the vocalist, sometimes you can hear the vocals shift from being very in-tune to being very out-of-tune when the vocal parts are more difficult.  After the vocalist finished the set, they took a pedal board with a full set of four pedals with them, tucked behind one of the monitors at the front of the stage.

The technology has been around for a while.  I first witnessed a version of it, at an open-mic in Missouri back in 2015, where the device added auto-tuned vocal harmonies on top of the main vocals.  And if an open-mic performer has a consumer version of the product in central Missouri, you can be sure musicians were using it for live performance in New York City long before that.  A visit to Amazon reveals pitch-correction devices for as little as $150.

Don’t get me wrong.  Auto-tune can be used for a variety of artistic effects.  Though, it can remove a lot of distinctive character in vocals, and the de-tuning of notes (such as the 7 or 3 notes of the scale) – a basic classical technique used to build tension and emotion – is rendered impossible.

I think the problem is that with live performance, there’s an expectation that people are getting a more unvarnished performance.  In fact, I think almost every person in the audience of this last performance thought that the singing was being done without alteration.  So there’s a degree to which the live performance is based on a kind of misrepresentation.

The worry, I think, is that live music has become the only refuge for (comparatively) unaltered performance.  If the live music scene in New York City becomes overrun with acts who are unable to put on a good performance without a crutch, then this seems like a bad thing for both listeners and the scene in general.

The Localist is a column focusing on issues relating to aspiring local musicians in New York City.  In his free time, the author performs as St. Lenox.  St. Lenox’s most recent record, “Ten Fables of Young Ambition and Passionate Love” was placed on Best Albums lists at Pop Matters and AllMusic.  AllMusic credits St. Lenox with “some of the most unique and unconventionally thrilling pop music in the late 2010s.”