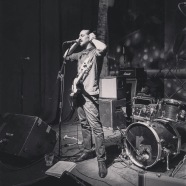 Posted by bigcityfolks on March 15, 2020 in Uncategorized | Leave a comment

Ammar’s music can be found HERE.

Niall: Tell me about your Fulbright scholarship? How did that come about? What was your field? What drove you to leave the marketing world? Were you nervous to make the leap? Do you wake up in cold sweats in the middle of the night?

Ammar: I have a background in economics and business and I was working in corporate banking when I got selected for a Fulbright Scholarship in marketing. This was a great opportunity for me – I would get a two year break from the corporate world and travel the US and be able to watch my favorite bands in concert for the first time in my life – which was just a dream before. And I suppose when I did see bands like Pearl Jam, Bruce Springsteen, Radiohead live, in the flesh – I realised they were very much human, living a dream which could possibly be chased. And without much thought, I picked up the guitar and started writing my own songs, at business school. Only as an escape first, but then when I had kept that on for a few years and had about 3 albums worth of songs, I decided to share them with the world. And when I did, the response was very warm and encouraging. Once I had a taste of performing, I just wanted more. More music, more shows – and I knew writing English rock songs in Pakistan was not the brightest idea, but I stuck with my gut and what came naturally to me and was sure not that my songs and my music would find its own audience across the world, but it would.

And now I’m here in NYC since the last six months, playing at some of the top live music venues with some of the best musicians and songwriters in the game. It’s terrifying and nerve wrecking, and also super rewarding in equal measures. Like riding the artistic pendulum. Cold sweats in the night but also brighter days with a head full of dreams – which I have never been closer to before.

Niall: When did you begin playing music? Tell me about your early musical peers/ teachers / heroes and being a young musician in Pakistan.

Ammar: I come from a military family, so while there was always fun and games, the focus was on doing well at school, and being responsible and disciplined in all things. But weekends we woke up to my dad playing his favorite English language rock songs loud while we hobbled over to breakfast. So from a very young age I was steeped in Elvis, Cliff Richards, The Carpenters – whatever my dad had on cassette. As we grew up we were surrounded by friends who were very musical, always jamming and playing shows. Most of the top musicians back home are now really close friends. While I was still in high school, my brother formed an Urdu rock band and they immediately blew up on the scene. They were on MTV and all the music channels. I used to go to shows they were playing and it was just the best feeling. But then my brother continued and focused on his corporate career instead.

Most of my musician friends would advise me to write and sing in Urdu or Punjabi so that I could access the masses, but for me,  songwriting is such a personal experience and oddly I felt I could express myself the best in English and through this English folk/rock aesthetic. It took years to come to the point where I realised that the only thing that I wanted to do was make music. So while I was working a marketing job, I would be in the studio after work. I put my first album together which took a year and half and I set my eyes on moving to NYC as a musician. This move also took two and half years to execute, to secure the artist visa. So while back home I was expected to sing in Urdu, here I am in NYC as a Pakistani singing folk rock songs in English. I naturally feel that it’s important to follow your dreams regardless of what is expected of you. I feel so privileged to share my music here, and share stories from my life and experiences – which I think is the most important thing. We are creatures that love a good story.

Niall: You’ve been in New York for 6 months now, tell me a couple of things that have surprised you? Inspired you? Also, what has been disappointing? Frustrating? Why did you chose New York?

Ammar: I moved from Islamabad, which is a beautiful but sleepy capital nestled at the foot of the hills, straight to the manic pace and madness of NYC. From a comfortable marketing executive desk job to being a musician hustling from show to show. I had been to New York before when I was here for my Fulbright back in 2012, and immediately taken by its soul and spirit. But coming into the city for weekends is very different from living here. Back then I was living in Balitmore, so I loved getting on an New York train and to mingle with all the characters with all their different languages and styles coming together. Now – having lived here, the same experience can be a bit of a nightmare sometimes. Another thing I didn’t pick up on before – that most people are hustling with two or three gigs to get by in this city. You have to really want to live here badly to survive here long term.

Niall: You moved here from Pakistan? What inspired and frustrated you there?

Ammar: The music scene back home had somewhat stagnated, with only one or two major corporate platforms promoting music. Musician generally have to rely on the support of big corporates who only really want to push their own agenda and message. But I think the one thing that really frustrated me is the lack of any music venues, where artists can regularly get together or showcase their talents.

Niall: As a fellow immigrant I enjoy seeing your enthusiasm for the city and the music scene here. New York is an undeniably tough city, do you find it hard to preserve that enthusiasm?

Ammar: Some days it can be really difficult to preserve the enthusiasm, but because of the almost insane switch I have made from the corporate desk job to this, I remind myself I wasn’t meant to sit behind a desk for life and that being able to live in this city and to count myself as one of its many local musicians is such a privilege. But yeah, some days can weigh you down. I am fortunate to have a mildly sunny disposition.

Niall: Tell me three things that you won’t find in a guidebook that anyone visiting New York should explore?

Ammar: There is so much to do in this city, on every street corner and on any block, that I think it is best to stray away from the touristy, guidebook places and just get lost. To find your own favorite deli, pizza, dive bar or hang. Where I live now in Brooklyn, there is a laundromat with a couple of arcade games in the entrance. One adventurous night we stumbled in to find that it, the laundromat, then opens up into a fairly big arcade den with a bar inside and is open all night. That is the kind of magic you may not find in a guide book.

Niall: Tell me three things that you won’t find in an Guidebook that anyone visiting Islamabad should explore?

Ammar: I love hiking the trails in the city, and by trail 5, you can find the best chai and pakoras. If you’re looking for Desi food I would highly recommend chattahs. Also, just forty five minute drive from the city is Khanpur Lake which is stunning and perfect for swimming and kayaking.

Niall: What are your goals for next few years in New York ?

Ammar: My goal for the year ahead is to lean in to the momentum that I have built, and settle into this beautiful corner I have carved for myself in this city with its amazing people, and keep playing and making more music. I would love to venture to other parts of the US and maybe even play some festivals and collaborate with other artists here.